Project managers sometimes have to turn nothing into something.  Change everyone’s doubt into confidence.  Solve an unsolvable problem.  Pull a rabbit out of a hat.  Turn lead into gold.  Turn stones into soup.  This sounds like magic to me.  Appropriate for Halloween.  Here’s a story with scary risks turned into a happy ending by project manager magic. 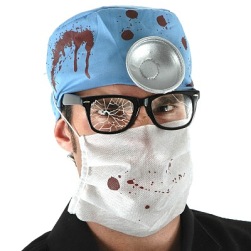 My wife and I grew up in Des Moines, Iowa. We didn’t meet until college, but we had one unique experience in common.  We learned about Halloween trick or treating in the 1950s in a town where trick or treat meant something different than anywhere else.  In Des Moines, we learned that the risk of tricks could become an opportunity for creative and constructive fun.

In Des Moines in the 1930s, maybe like everywhere else, Halloween Night was getting out of hand.  No one could control the kids’ Halloween vandalism.  Soaped windows, eggs thrown on doors, even fires and bricks through windows.  Times were tough in the 30s and maybe this was an outlet.  But, it was a problem.  Des Moines needed to somehow magically change this situation into something much better.  A young woman, Kathryn Krieg, managed the Des Moines Playground Commission then.  She came up with a little project that magically improved Halloween.

Kathryn worked with the Community Chest (now the United Way) to come up with a new idea for Halloween.  They declared the night before Halloween “Beggar’s Night” – the official night to dress up and ask for candy.  But, there was a catch: to get candy, the beggar had to earn it.  They said “eats should be given only if such a ‘trick’ as a song, a poem, a stunt or a musical number, either solo or in group participation, is presented.”  (Thanks, Wikipedia).  That’s right – no attempted comedy or talent, no treat.  So, for Marcia and me, it was part of Halloween to come up with a joke or song, usually practiced in school and at home, and use it dozens of times on Beggar’s Night to fill up the treat bag.  For the adults answering the doors, it was about playing dumb a hundred times while asked “What’s black and white and red all over?”  (Answer: a newspaper; or the non-politically correct Halloween version – a bleeding nun.  We didn’t know what politically correct was in the 50s).

I was a song guy.  And, it had to be a song that no one else did.  My cousin gave me a Mad Magazine when I was six and I got my dad to sell it in his drug store so I always had the latest copy.  (This may explain a lot about me.)  “Mad” would come up with satirical versions of popular songs every year; and I would sing one.  Also not politically correct.  My favorite was the mad doctor year.  The costume started with an old white pharmacist coat gleefully splattered with a blood like substance by my mom.  A toy stethoscope, a reflector headpiece, and a dirty gauze face mask added authenticity.  The piece de la resistance was the rubber gloves.

Earlier in the fall the family had gathered fallen black walnuts at Walnut Woods State Park.  Walnuts right off the tree aren’t the tidy hard wrinkly nuts we see in the store. 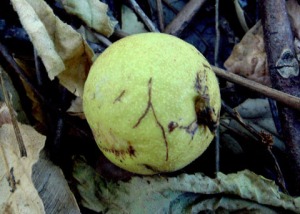 They start as a larger green ball with a leathery skin and a half inch of sticky greenish brown goo between the skin and the nut.  The skin and goo have to be peeled away.  The greenish brown goo adheres permanently to whatever it touches.  In my case, it was the rubber gloves I wore with my mad doctor costume.  Unwary adults would open their door to a four foot tall fake doctor with a bloody white coat and ungodly gross greenish gloves covering clenching groping hands thrust at them like Frankenstein greeting his girlfriend.  Then they’d hear this song, sung to “Whistle a Happy Tune,”  “Whenever I get a case that’s a bit too tough for me, I tell them they’ve got a bug, and they will never see, I’m a quack!”  It probably went on a few more verses, but you get the idea.

But, I digress.  Remember this story was about solving an unsolvable problem.  You can imagine that we kids, trying to outdo one another’s jokes and costumes, spent less time thinking about soap, eggs, and firecrackers.  It worked.  Kathryn’s unique idea and persistence changed the culture of Halloween in Des Moines from destructive to constructive in a few years.  This culture persisted through my youth and is still part of Des Moines’ Halloween celebration today.  Marcia and I assumed that Beggar’s Night and jokes and songs were part of Halloween everywhere.  In the Air Force, we spent Halloween in a lot of different places.  Kids would show up at the door, we’d ask them for their trick.  They’d impersonate a deer in the headlights for a few seconds, roll their eyes and repeat their demand “Trick or Treat!”  “OK, here’s your candy.  Next year, we want a joke or a song.”  But we never got one because they weren’t from Des Moines.

Kathryn Krieg probably didn’t think of herself as a project manager; but she did have a project-like challenge and rose to it in a way we can learn from.  She looked at a situation with a lot of risk and imagined what could go right.  She engaged those who were part of the problem in the solution.  She looked for the opportunities in the risks.  And, she changed Halloween in Des Moines, Iowa.  She probably changed me and a lot of other Iowa kids, too.  Thanks, Kathryn.

Thanks for reading.  Now, what’s your trick?  Happy Halloween!

Copyright Glenn Briskin and “The Other Side of Risk” 2012